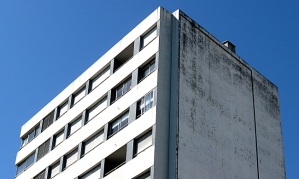 a) The internal surface temperature of a building component or building element below which mould growth is likely, given the internal temperature and relative humidity – the method can also be used to assess the risk of other surface condensation problems.

b) The assessment of the risk of interstitial condensation due to water vapour diffusion. The method used assumes built-in water has dried out and does not take account of a number of important physical phenomena including:

Consequently the method is applicable only to structures where these effects are negligible (BSI 2002).

Section 6.2
Starting with the first month in which any condensation is predicted, the monthly mean external conditions are used to calculate the amount of condensation or evaporation in each of the twelve months of a year. The accumulated mass of condensed water at the end of those months when condensation has occurred is compared with the total evaporation during the rest of the year. One-dimensional, steady-state conditions are assumed. Air movements through or within the building elements are not considered (BSI 2002).

Section 6.3
There are several sources of error caused by the simplifications described in 6.2.

NOTE Due to the many sources of error, this calculation method is less suitable for certain building components and climates. Neglecting moisture transfer in the liquid phase normally results in an overestimate of the risk of interstitial condensation (BSI 2002).

This standard defines the practical application of hygrothermal simulation software used to predict one- dimensional transient heat and moisture transfer in multi-layer building envelope components subjected to non steady climate conditions on either side. In contrast to the steady-state assessment of interstitial condensation by the Glaser method (as described in EN ISO 13788), transient hygrothermal simulation provides more detailed and accurate information on the risk of moisture problems within building components and on the design of remedial treatment. While the Glaser method considers only steady-state conduction of heat and vapour diffusion, the transient models covered in this standard take account of heat and moisture storage, latent heat effects, and liquid and convective transport under realistic boundary and initial conditions. The application of such models has become widely used in building practice in recent years, resulting in a significant improvement in the accuracy and reproducibility of hygrothermal simulation (BSI 2007).

BS 5250:2011 Code of practice for control of condensation in buildings.